The JFK Movie You Haven’t Seen

THE JFK MOVIE YOU HAVEN’T SEEN

Peter Landesman’s latest movie on the assassination of JFK entitled Parkland opened to mixed reviews, compared to Oliver Stone’s 1992 release of JFK, which still remains one of the best films on the subject.

Stone’s film has been widely criticized and accused of taking dramatic license, but his  achievement in storytelling in filmmaking is incredible, whether you believe it or not.  Stone said in a Huffington Post article that, “JFK was a metaphor for all those doubts, suspicions and unanswered questions.”

According to a 2003 Gallup poll, it found that 75 percent of Americans felt there was a conspiracy involved in the assassination of President John F. Kennedy.  Fast forward to present, the country is still divided in opinion, and a smaller percentage still believe Oswald acted alone.

You can see which ones made it in America’s Top 10 here:

Bestselling authors and legal experts Robert K. Tanenbaum and Mark Shaw tell a different story. Their words, perspective and dialogue are what Hollywood screenwriters seek out. When you read or listen to them, you imagine the JFK movie you haven’t seen.

MARK SHAW AND THE POISON PATRIARCH

In Mark Shaw’s new release, Poison Patriarch: How the Betrayals of Joseph P. Kennedy Caused the Assassination of JFK, focuses, for the first time, on why attorney general Robert F. Kennedy wasn’t killed in 1963 instead of on why President John F. Kennedy was, Mark Shaw offers a stunning and provocative assassination theory that leads directly to the family patriarch, Joseph P. Kennedy. Mining fresh information and more than forty new interviews, Shaw weaves a spellbinding narrative involving Mafia don Carlos Marcello; Jack Ruby (Lee Harvey Oswald’s killer); Ruby’s attorney, Melvin Belli; and, ultimately, the Kennedy brothers and their father. What was Joseph Kennedy’s relationship to organized crime? And how was his insistence that JFK appoint RFK as attorney general tantamount to signing the president’s death warrant? 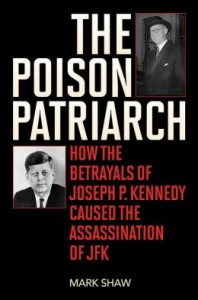 For fifty years, Shaw maintains, researchers investigating the president’s murder in Dallas have been looking at the wrong motives and actors. The Poison Patriarch offers a shocking reassessment—one that is sure to alter the course of future assassination debates.

A GREAT ENDORSEMENT FROM A WISE GUY

“A fascinating and unique account of what happened in Dallas in 1963. Mark Shaw really nails it down regarding who was responsible for the assassinations and why.”

Badge of the Assassin, based on a Robert K. Tanenbaum bestseller, was released in 1985 as a made for television film starring  James Woods, Yaphet Kotto and Alex Rocco.  James Woods portrayed Assistant District Attorney Robert K. Tanenbaum. Based in New York, the film was a true-crime account from the former district attorney and New York Times bestselling author Robert K. Tanenbaum and Philip Rosenberg. Tanenbaum was also the film’s co-executive producer. Writer Lawrence Roman adapted the book for the TV movie. The film is an account of the detective work and prosecution that resulted in the conviction in 1975 of the Black Liberation Army members who, four years earlier, had shot to death two New York City police officers, Waverly Jones and Joseph Piagentini, in an unprovoked attack. 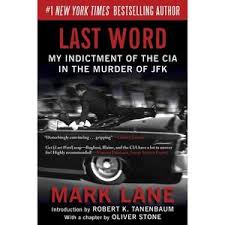 THE AUTUERS OF TRUE CRIME

In 1991, an unknown man with a camcorder caught the Rodney King beating, his name: George Holiday.  He would be considered a modern day Zapruder.

Ultimately and indelibly, it is the Zapruder film that still confounds us. To watch those graphic and gruesome frames as the motorcade passes by the Stemmons Freeway sign− everything changes in seconds and we pass, as a nation of onlookers, from elation to tragedy.  Frame 312 and 313− that fatal shot. The questions still remain 50 years later to this day.  The Zapruder film offers compelling and cogent evidence. We all wish we could yell, “Cut!” and that history’s clapboard would snap… the scene reshot.  That’s the stuff of H.G. Wells and Rod Serling.

Filmmakers will continue to tell the JFK assassination for years to come, shooting from different angles.  It’s as if history’s clapboard has the truth, but the truth is: The movie that tells the irrefutable and undisputed truth for everyone can’t be made.

President John F. Kennedy gave America hope, and it was all shot down in a day and everything changed.  It is that hope today, that one day we will know the truth.